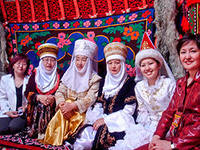 The first holiday in Kazakhstan is the Nowruz holiday or Spring Holiday, which originates from pre-Islamic history of the Kazakhs. This day the main holiday property is specially prepared dish nauryz-koje, which includes such ingredients as meat, wheat, rice, barley, Siberian millet and kurt. People visit their relatives and friends, sing songs, as well as wish the New Year to be prosperous.
Raz-ayt Holiday is celebrated the first and second day of the month in honor of the end of fasting month of Ramadan. According to the canons of "Koran", every Moslem must fast during the month every year. During the day it is not allowed to eat, drink and take pleasure. But after sunset and before sunrise it is allowed to eat and drink. All daytime must be devoted to working, praying and reading Koran. The holiday is celebrated in honor of the end of Ramadan month. The main rite of this holiday is a special common prayer, after which is followed meal and giving charity to poor people. This day is also organized various entertainment activities.
The most important Muslim holiday is Kurban-ait or "Feast of Sacrifice", which is usually celebrated for three or four days. There is a legend, once one of the ancestors of the peoples of northern Arabia Ibrahim saw Allah in his dream, who told him to bring to sacrifice his son Ishmael. When he was ready to kill the boy, Allah was sure in his devotion and told him to bring him a lamb. So, this day every faithful Muslim sacrifices a sheep or lamb. Meat is used for family holiday meal, the rest is given to the poor people. This day also all people congratulate each other, the Kazakhs who live in the village, arrange traditional competition kokpar.