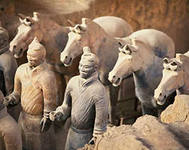 Ancient Turkic Emperor Mausoleum was found by Kazakhs archaeologists in Mongolia. Scientists say that the find dates back to VII century, is sensational. During the excavation, scientists found out how the ancient Turks buried underground object 1300 years ago. Thanks to the long and diligent work of archaeologists, it was managed to completely preserve the appearance and architectural structure of the mausoleum of early medieval ancient Turks.
Rare and unique object is a corridor with no steps, length 42 m, on both sides of which are drawn pictures. There were found about 352 exhibits in the mausoleum. These are jewelry, paintings, everyday objects. A particular interest was arisen by terracotta figures, which were found in one of the chamber of the mausoleum.
There also were found about 90 small sculptures symbolizing the burial ceremony. The finding indicates that in VI-VII century manufacturing "terracotta" sculptures existed among the ancient Turks, who may become the first who used it. Kazakh scientists say that for the preservation of the unique findings, it is necessary to build a museum and create all the necessary conditions for this.