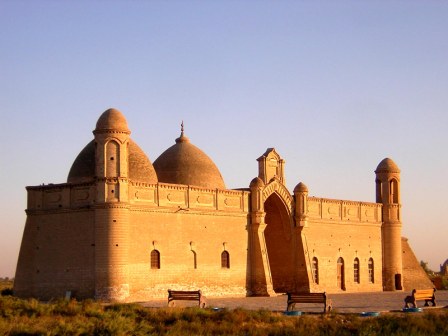 Arystan Baba mausoleum is the architectural monument of the XII-ХІV centuries, near the ruins of ancient Otyrar of Yuzhno-Kazakhstanskaya Oblast, in 150 km. from the city Shymkent. The mausoleum was built over the tomb of the famous religious mystic Arystan Baba, who lived in the ХІІ century.
The legends call Arystan Baba the teacher and spiritual adviser of Khoja Ahmed Yasawi. As the legend tells, Arystan Baba was the associate of prophet Mukhammad. Once prophet Mukhammad and his associates were sitting and eating a persimmon. One persimmon always fell out of the dish, and the prophet heard the revelation: “This persimmon is for a Muslim Akhmed, who will be born 400 years later than you”. The prophet asked his associates who would give this persimmon to the future owner. Nobody answered. The prophet repeated his question, and then Arystan Baba replied: “If you ask 400 years of life for me from Allah, I will hand the persimmon”. According to the people’s stories and written sources, Arystan Baba 400 years later became the spiritual adviser of Khoja Ahmed Yasawi and indeed handed the stone of the persimmon to him.

The mausoleum is the burial vault and memorial mosque and now it is a place of pilgrimage for Muslims.
Now over the tomb of Arystan Baba there is a mausoleum of area 35×12 m. It is built of breaks on the alabaster mortar in the facial brickwork. The lengthy main facade is flanked with two minarets and decorated with the figured brickwork. The remained building was being constructed during the first ten years of the XX century, and it is the multicamerate complex of the diametrical and axial composition. The construction consists of two parts - two-compartment burial vaults (gurkhans) and memorial mosque, joined with a big arched corridor. Gurkhana is covered with two similar high sphero-conical domes. In the first room there is a huge gravestone of Arystan Baba, in the second room there are gravestones of his pupils and followers: Hermet-Azyra, Karga-Baba and Lashyn-Baba.
Since 1982 Arystan Baba mausoleum has been under the protection of the Kazakh government.


Other sights of South Kazakhstan