Complex of Khoja Ahmed Yasawi in Turkestan city is a prominent monument of medieval architecture.
The mausoleum of Khoja Ahmed Yasawi, situated in Turkestan in the South of Kazakhstan is a wonderful complex of palaces and temples, a masterpiece of architecture, built in the period from 1385 to 1405. It is included to list of World Heritage of UNESCO.
Today’s mausoleum was built on the burial place of the Sufi poet Khoja Ahmed Yasawi, who had a great authority among the Muslims of the region and made a significant influence on Islam in Central Asia. He died in 1166 (1167) and was honourably buried in small mausoleum.
The new mausoleum was built after 233 years after his death by the order of Tamerlane. In 1398 Tamerlane destroyed Golden Horde of khan Tokhtamysh and burned its capital Saray-Berke. In honor of this victory the leader decided to build a new, great memorial complex on the place of old mausoleum Khoja Ahmed Yasawi, that became very ramshackle. Tamerlane was guided as by religious beliefs, as political aims. Having constructed the mausoleum on the tomb of the respectful man, he affirmed his authority and strengthened his authority among the nomads of the steppes. Some historians consider that Tamerlane himself participated in project drafting for the future mausoleum and gave instructions to the construction workers.
The memorial complex Azret-sultan besides the mausoleum of Khoja Ahmed Yasawi itself includes many other constructions built near it in different years, namely medieval bathhouse (monsha), khilvet (cell), where lived after 63, the mausoleum of Tamerlane’s great granddaughter and daughter of the astronomer Ulugbek Rabii – Sultan Begim, the mausoleum of the Kazakh khan Esim, shildekhan and other historical monuments, among which there is the underground house for thoughts Kumshik-ata. In whole the complex is sometimes called as historical and cultural reservation.
The mausoleum of Yasawi consists of huge, right-angled building (46,5x65,5 meters) with portals and domes. The high of the arch portal is 37,5 meters, the high of the main dome is 44 meters, diameter is 22 meters. The thick of outside walls is almost 2 meters, the walls of the central hall are 3 meters. The building has a large entrance portal and many domes. Around the central hall there are more than 35 rooms. The door of the burial vault is decorated with a beautiful carving on ivory and wood.
The mausoleum consists of eight rooms of different purposes, which are formed around the central, largest hall in the complex – kazandyk. They are the mausoleum of Khoja Ahmed Yasawi, mosque, palace halls – big and small aksarays, library (kitabkhana) and the utility complex, which consists of a well (kudukkhana), dining (askhana), dwelling rooms (khudjra) and others. 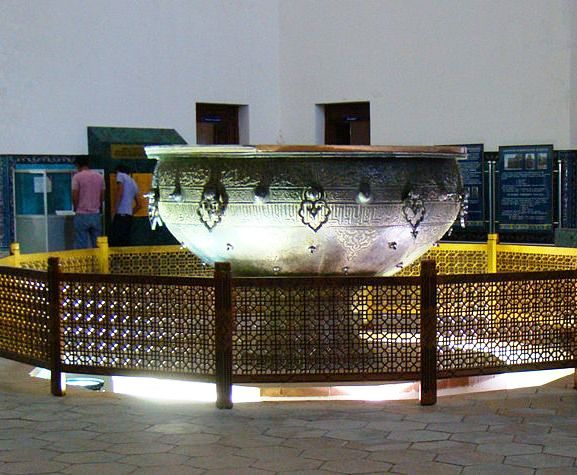 One of the main sights of this mausoleum is Tay Kazan, the largest cup for water in the whole Eastern Muslim world. According to legends, the cup was casted from the alloy of seven rare noble metals in Karnak village, in 25 kilometers from Turkestan city. The surface of Tay Kazan is decorated with three belts of relief notes on the background of the plant ornament. The upper note says that this cup is for water – the gift of Timur in honor of the monument of Khoja Ahmed Yasawi. The middle note says: “Be blessed”, 1399 – the year of cup producing and name of the master – Abdulgaziz ibn Sharafutdin from Tebriz. The lower note says: “glory to Allah!”. The cup handles are in the form of lotus and they alternate with round projections. Since 1934 this cup has been exposed in St.Petersburg in the Hermitage Museum. And in 1988 Tay Kazan was returned to the mausoleum.
The outer beauty of the monument harmonizes with its inner elegance.
The idea and philosophy in the project of the mausoleum are less attractive. The number of rooms in it corresponds to the number of days in a year. They are situated in seven different levels that embody seven horizons of the sky. The blue domes mean the eternity and unity, because blue sky is common for all nations. The central dome, which has the astronomic pendulum, is the ideological burden - the importance of disclosure of the solar system. Around the big cup there are 9 planets of the solar system, which are casted from different metals. For example, the Sun embodies gold, the Moon – silver and etc. The cup itself is made of compound allegation, and little warm is need for cooking meal in spite of its big capacity.


Other sights of Turkestan